How the Pisces Symbol Became The Fish 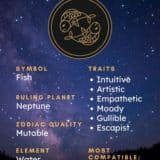 The Pisces symbol is that of the two fish. The zodiac sign is represented by two crescent moons connected by a straight line. Pisces dates fall between February 22 and March 20. 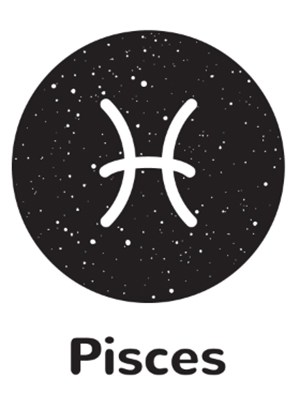 Pisces are an emotional water sign. Pisces are known for their artistic abilities, their penchant for daydreaming, and their capacity for deep romantic connections.

What Is the Pisces Symbol?

The symbol for Pisces is two fish swimming in opposite directions connected with a cord. When drawn as a glyph, it’s two crescent moons attached with a straight line.

The crescent moons symbolize the lunar cycles as well as Pisces’s receptivity to new ideas and experiences. The connection point is what keeps their emotions, their realities, and other polarities in balance. You may also see Pisces represented by a drawing of two fish.

For Pisces, this anchor between the two fish is particularly important. Unlike, say, Capricorn, Pisces can easily get lost in an idea and start swimming in the wrong direction. Then, suddenly, they’re halfway across the sea before they even realize what’s happened. This anchor helps them not do that. 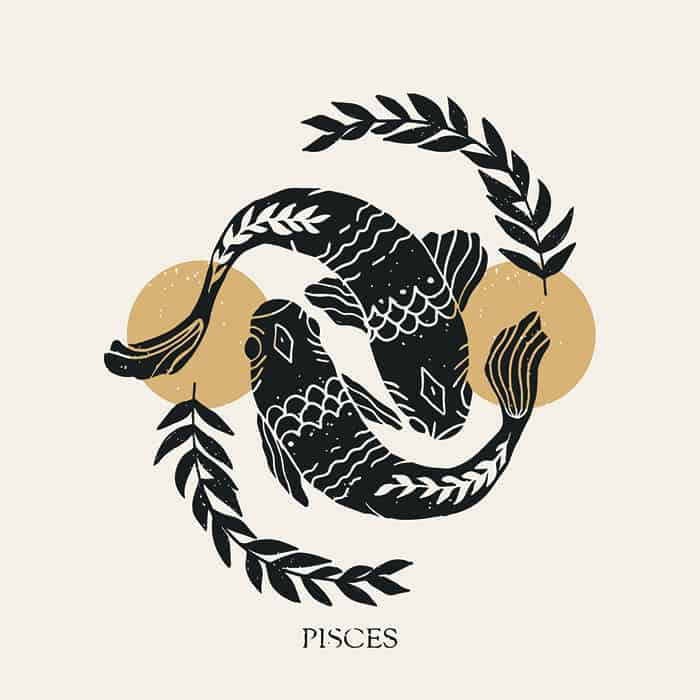 Why Is Pisces a Fish?

Like Aquarius, the Pisces constellation is located in the portion of the sky known as the Great Sea. The Babylonians who created the Zodiac called it The Tails or Mul Kun-meš. (They were the tails of Anunitum and the Swallow constellations, which you can read more about this in Gavin White’s book.)

According to White, Pisces may not have started off as a fish, but instead as the two prominent rivers of Mesopotamia: the Tigris and the Euphrates. The connection point would have been Shat-al-Arab, the place where the two rivers join. The Babylonians used to add drawings of fishes in their river drawings. This is likely where the concept of Pisces as the fish came to be.

Pisces is ruled by Neptune, the planet that governs dreams, creativity, and intuition. Neptune’s glyph is the trident that the sea god Neptune and Poseidon wields. The three points on the trident’s crescent may represent the three stages of life: birth, life, and death or the earth, sky, and sea.

The combined symbols of the crescent that represents spiritual openness and the cross of matter symbolize our purpose as humans to reach for spiritual enlightenment instead of earthy desires. 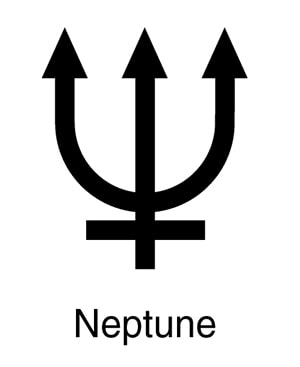 I often confuse the symbols for the water signs of Pisces and Cancer. When I think about Pisces as two fish swimming in opposite directions, my mind immediately jumps to the Cancer symbol. That gylph looks like a 6 and a 9 and no, we’re not using phrasing right now. 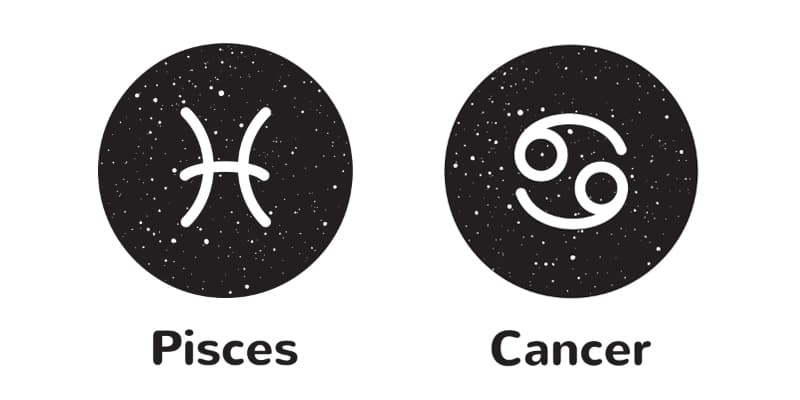 This symbol looks like two fish! But, in fact, it’s the claws of the crab. The best way I can keep the two straight is to remember the two fish must be connected. The Cancer symbol doesn’t have a connection point. Pisces has the ribbon that links the two fish together so they can’t swim off to different parts of the ocean.

Latest posts by The Pagan Grimoire (see all)
1.9K shares 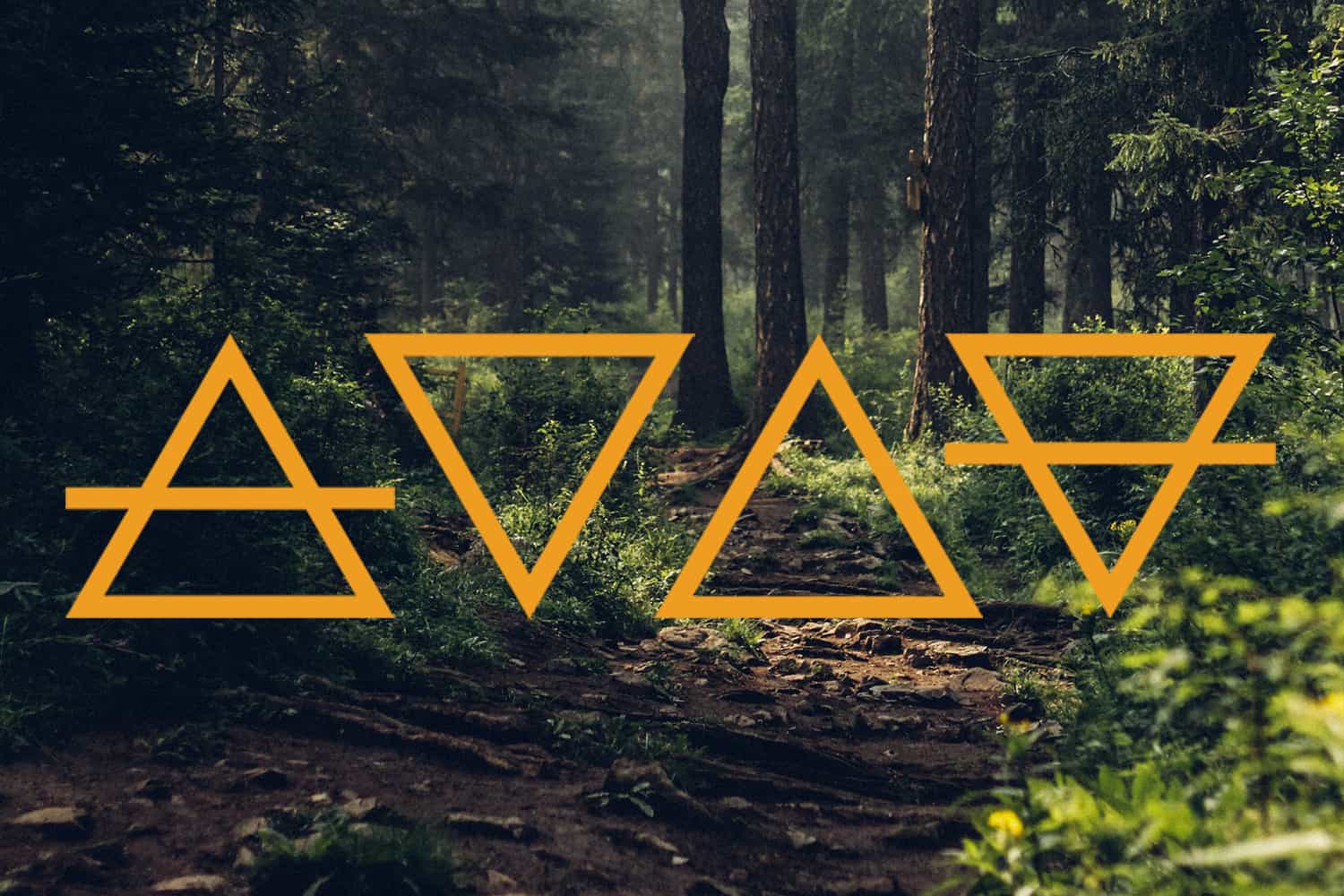 Read More
Discover the characteristics for your element and the traits you share with other signs. 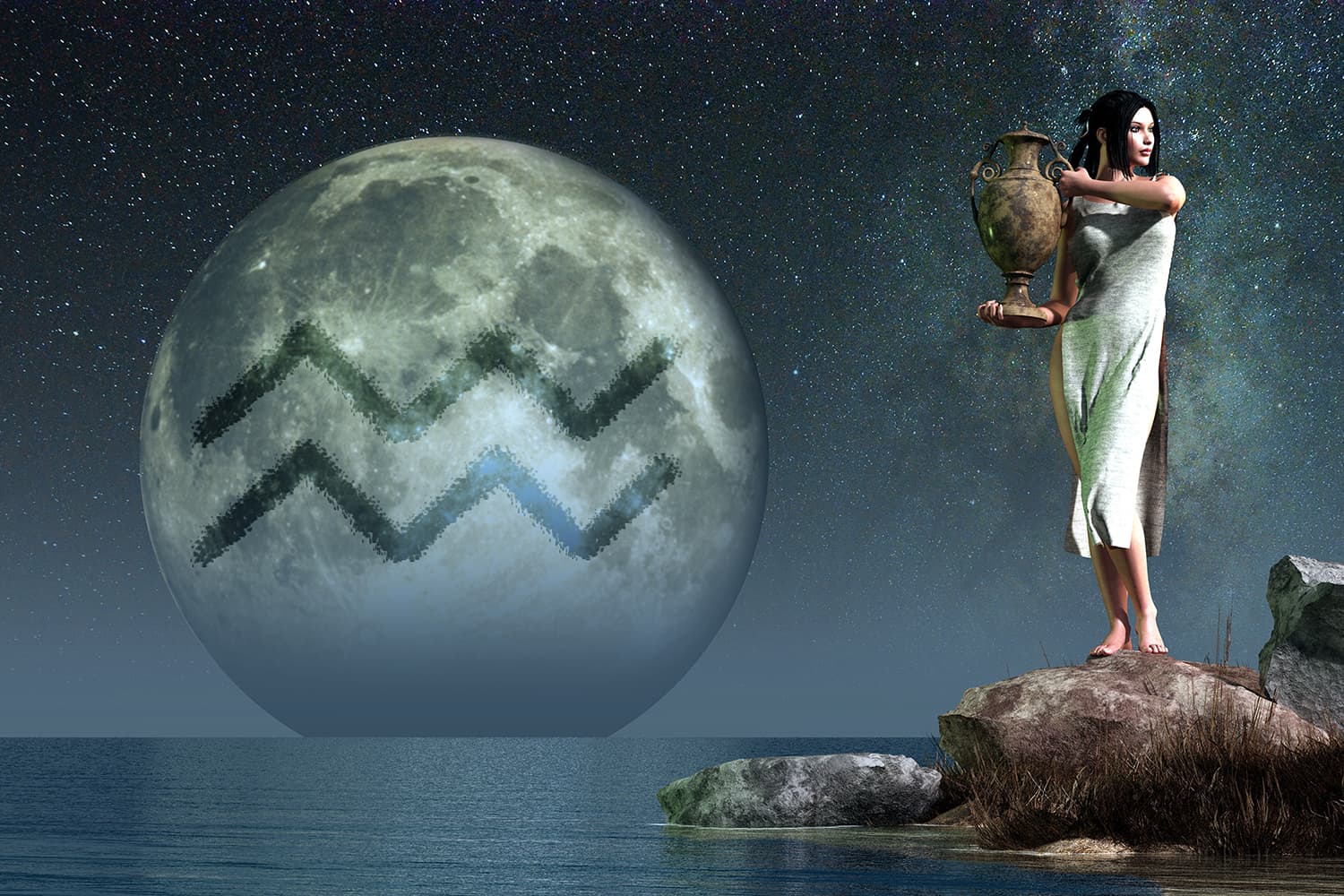 Read More
How did Aquarius become the water bearer? 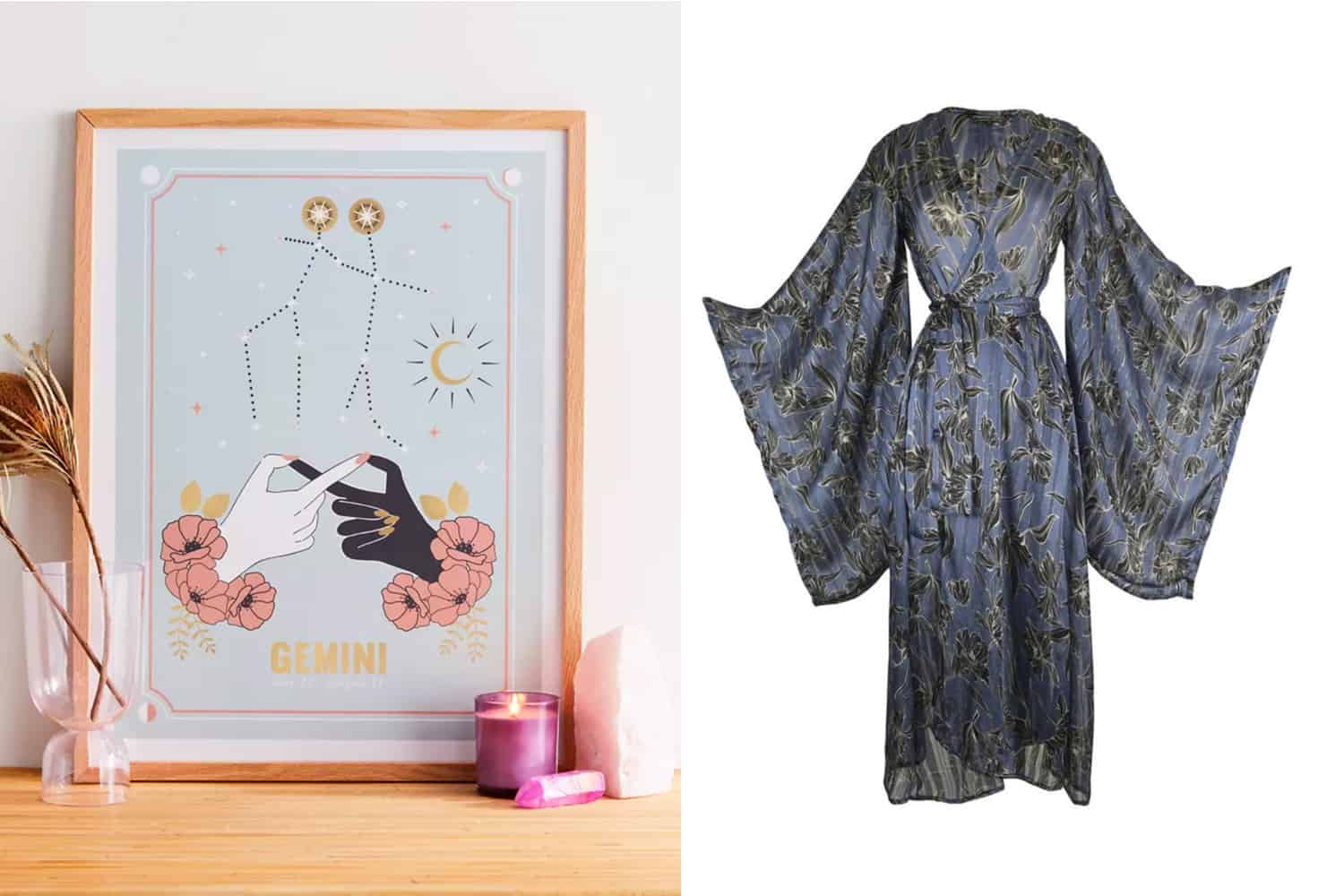 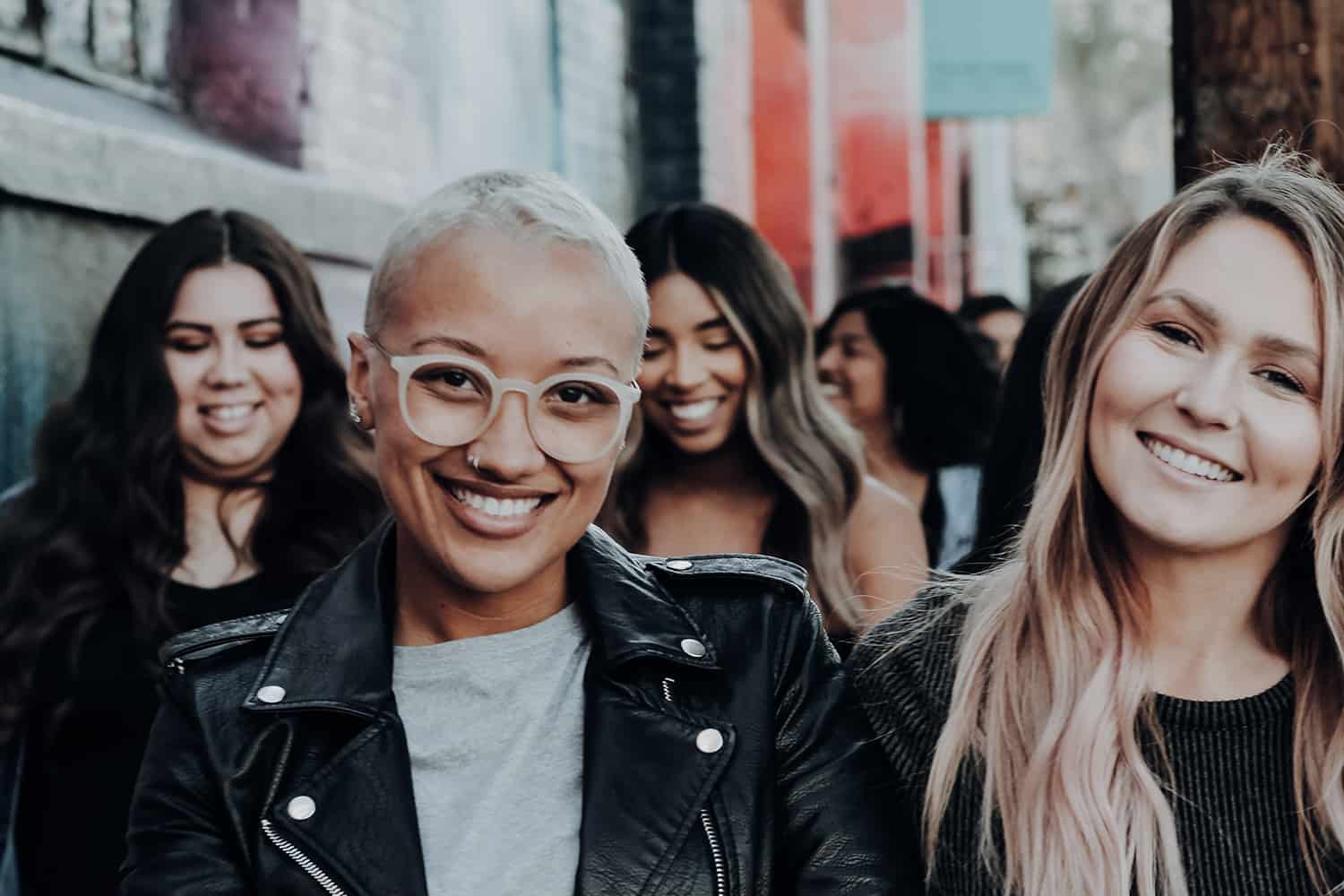 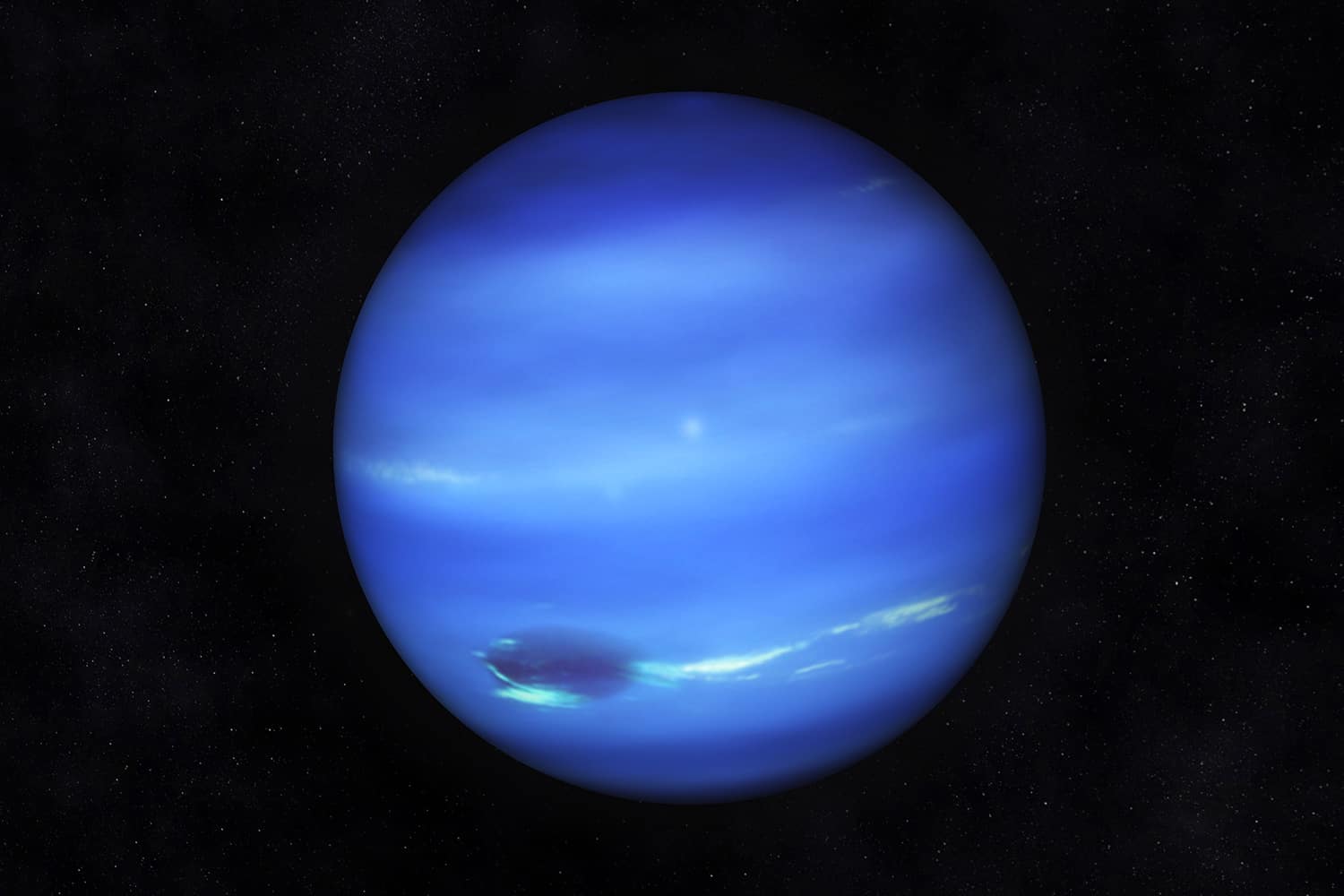 Read More
Discover your ruling planet, its symbol, and the aspects it governs.